Stay ahead of the game!

From the way someone plays Dota you can tell his mentality towards life. As Dota is not just a game, its a way of thinking.

The grass moves in the direction of the summer wind, when I was young, I always thought I was the wind, I felt I had the power to change to world. But later in life, I gradually noticed that I was just an insignificant thread of grass. I always found myself complaining about the society and the people around me. I always had the mindset that the world was against me. I was being left behind in the cultural change. All the things I enjoyed was back in the past. I had to adapt in order enjoy the current society. I use to reminisce back in the days in China, everyone knew each other around the neighbourhood. We would play on the streets, play in the park and play in each other’s homes. It was a tight knit community. I was never alone. After moving to the UK, I found this was not the case any more…….The streets were empty, the air was saturated with silence. I had to change. I had to adapt to the rapid increase in the speed of technological advance in the 21st century. I adapted to the widespread use of the internet. To be able to enjoy life, you have to let the past stay as happy memories. And change yourself to fit the current society as the current society will never change for you.

How does apply to Dota? Easy. I believe if you want to be a good player, you have to be update with the current Meta game from watching competitive games. Few Days ago I was playing a pub game, and I saw an Axe with double Stout shield as first items. This made me chuckle….in the current fast Meta game getting 2 stout shields gives Axe no early ganking potentials.

Understanding the current Meta game also allows you to pick better line-up. Picking up early to mid game gankers is a far more affective approach to the match than having a 4 protect 1 strategy. Even team DK are changing the way they play. They use to give Burning the safe lane to farm until he has all his items, but now we see Burning playing aggressively on the hard lane.

My steam ID: 0杀19死 (0Kills19Deaths) , strangely someone today added with a conspicuous ID: 19杀0死 (19Kills0Deaths). To my own surprise I accepted the friend invite in a jiffy. I quickly asked why he named an ID so similar to mine. He did not reply. He changed the subject and asked me to join him in a game, I rejected his game invite as I had really bad pings at the time. I asked him, do I know you? Are you someone I know already? are you trolling? He did not reply. Instead he changed his display picture so that it matched my picture. Now both of us have identical display pictures, but the only difference is that his display picture is an upside down version of mine…..

Do I actually know this person?

Why is he trolling me? 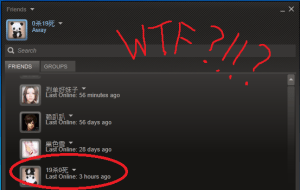